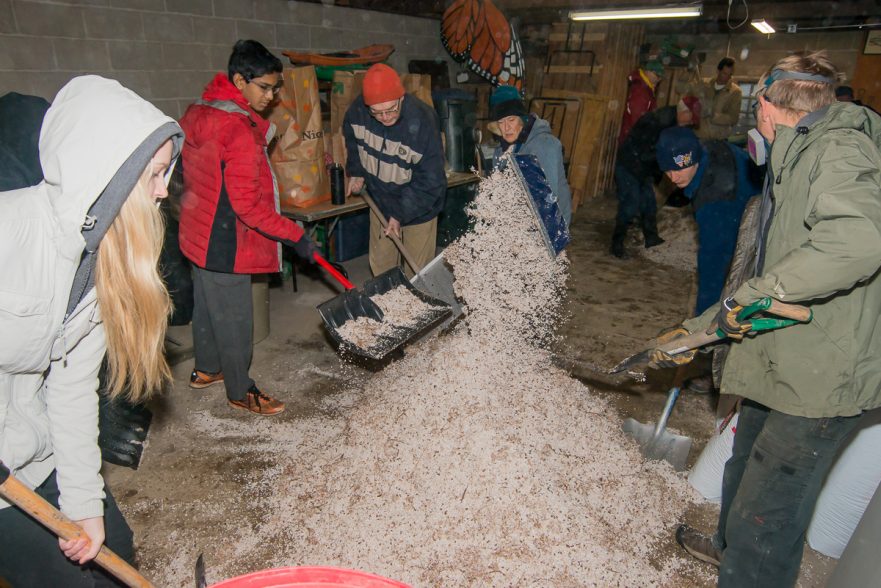 Coming into CFC on Saturday, November 4, it certainly looked like someone was having a party. In spite of rain and cool temperatures the parking lot was overflowing with cars and the air was filled with laughter coming from the seed barn. The scene inside was a party with lots of happy people moving in a well-choreographed dance of mixing specific combinations of native seeds for the annual CFC seed mixing event.

This year was a record breaking event:  45 volunteers of all ages participated; a new record of 215 species of critical seeds was mixed; and yet it was the quickest mixing time on record of just over one hour! Mixes were carefully made with appropriate plants for each ecosystem type, such as dry prairie vs. wetlands vs. savannas. The proper combinations of seeds were mixed with perlite which is used as a binder and extender to help visually show coverage when the seeds are hand sown. Seeds will now be sown on the remaining November workdays: Thursdays and Saturdays, 9:00am – 11:00am.

This fun seed mixing party was the culmination of months of hand collection, sorting, drying, cleaning, and weighing native seeds by volunteers. Over 500 volunteer hours were contributed this year and many first time volunteers who had collected seeds came to help and see how the seeds were mixed. All the new faces were warmly welcomed.

The huge success of this party, and everything leading up to it, was thanks to the team who volunteered tirelessly in leadership roles.  They scouted which seeds were ripe for collecting at which times on each land parcel, organized volunteers, prepped equipment, catalogued and organized the seed shed, facilitated mixing and shared their knowledge in answering millions of volunteers’ questions. Sincere thanks go to: Ralph Tarquino, Cliff Schultz, Randy Holtz, Doug Johnson, Luke Dahlberg, Matt Hokanson, Daniel Suarez, Steve Smith, Katherine Grover, Mike Raczyl, Carol Hogan, Wes Wolf, and Sara Schultz. Thanks also to our BGI partners who worked alongside CFC:  Bobolink Foundation, Lake and Cook County Forest Preserves, Great Lakes Audubon, and Friends of the Forest Preserves.

CFC plans to keep this seed party going. Join us for seed sowing at upcoming workdays. Your efforts can help make open spaces and ecosystems healthier and more beautiful.