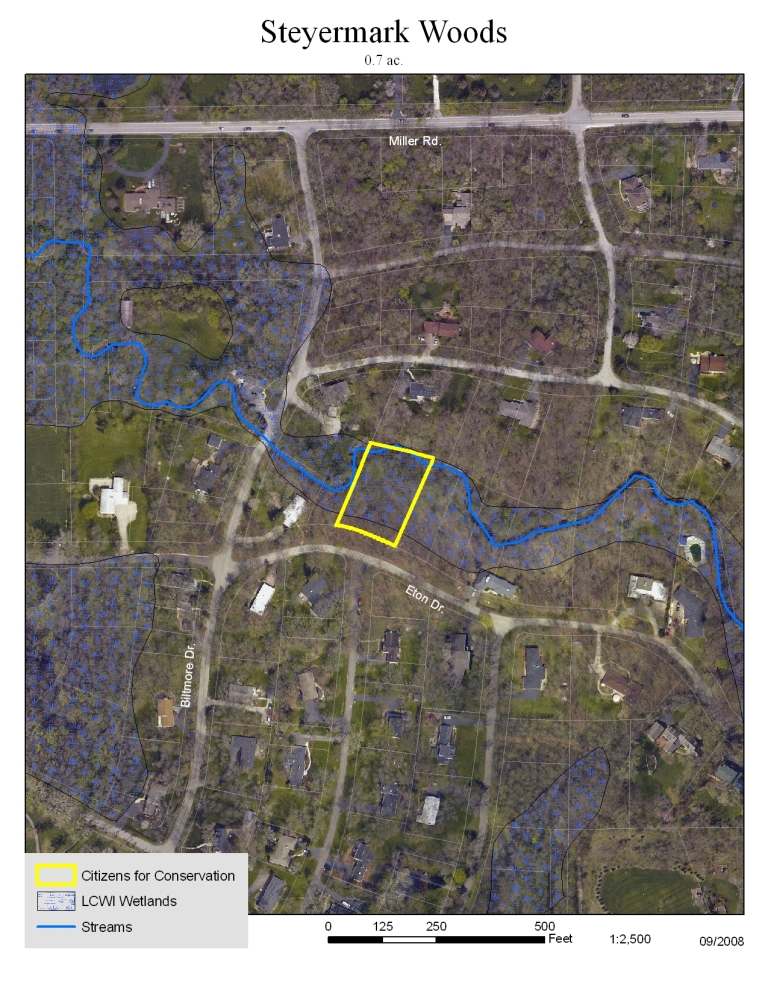 Steyermark Woods is one of CFC’s smallest preserves.  It is located in North Barrington on Eton Drive just east of Biltmore Drive. Though it is small in size, its beauty is grand.

Steyermark encompasses about an acre and a half of oak and hickory wooded ravine and floodplain along the north branch of Flint Creek. The flow is seasonal: significant and substantial in the spring, smaller in mid-summer, often a trickle by fall. The ravine hosts a wide variety of spring-blooming ephemerals, including Jack-in-the-pulpit, wild geranium, trillium, anemones, bloodroot and baneberry to name a few. In the fall a variety of native asters, goldenrods, and the red berries of Solomon’s seal add another burst of color to the hillsides. CFC also maintains adjacent vacant land on either side of the preserve, effectively increasing restored land to almost two acres.

The preserve is named in honor of the famous botanist Julian Steyermark, who was a North Barrington resident and a curator at the Field Museum of Natural History in Chicago during the late 1940s.  Mr. Steyermark is listed in the Guinness Book of World Records as the “champion plant collector” having an unrivaled total of more than 137,000 specimens. During World War II, Mr. Steyermark was sent to South America to hunt for quinine to treat soldiers exposed to malaria in the South Pacific. In 1986, he wrote a letter to Citizens for Conservation thanking us “for protecting both the Eton Drive Property as well as the Barrington Bog.”  He added, “It is marvelous that your group has been farsighted enough to get some of the areas preserved around Barrington.” Since 1996, CFC interns have used this section of Flint Creek to monitor and collect macroinvertebrates (primarily insect larvae of damselflies and mayflies) as part of a state-wide RiverWatch program. Water quality has been consistently rated poor.  We hope restoration by the Village of North Barrington further upstream will have a positive impact in the future by reducing silt and pollutants.

Unfortunately Steyermark is plagued by an annual spring infestation of garlic mustard. Residences upstream of the preserve have allowed this invasive species to spread aggressively, and the seeds find their way to our little preserve year after year. It is frustrating for CFC volunteers who pull the garlic mustard annually yet see little progress.

Come visit Steyermark Woods, and you will see why CFC volunteers work to preserve this acre. I know you will agree their efforts are most worthwhile.