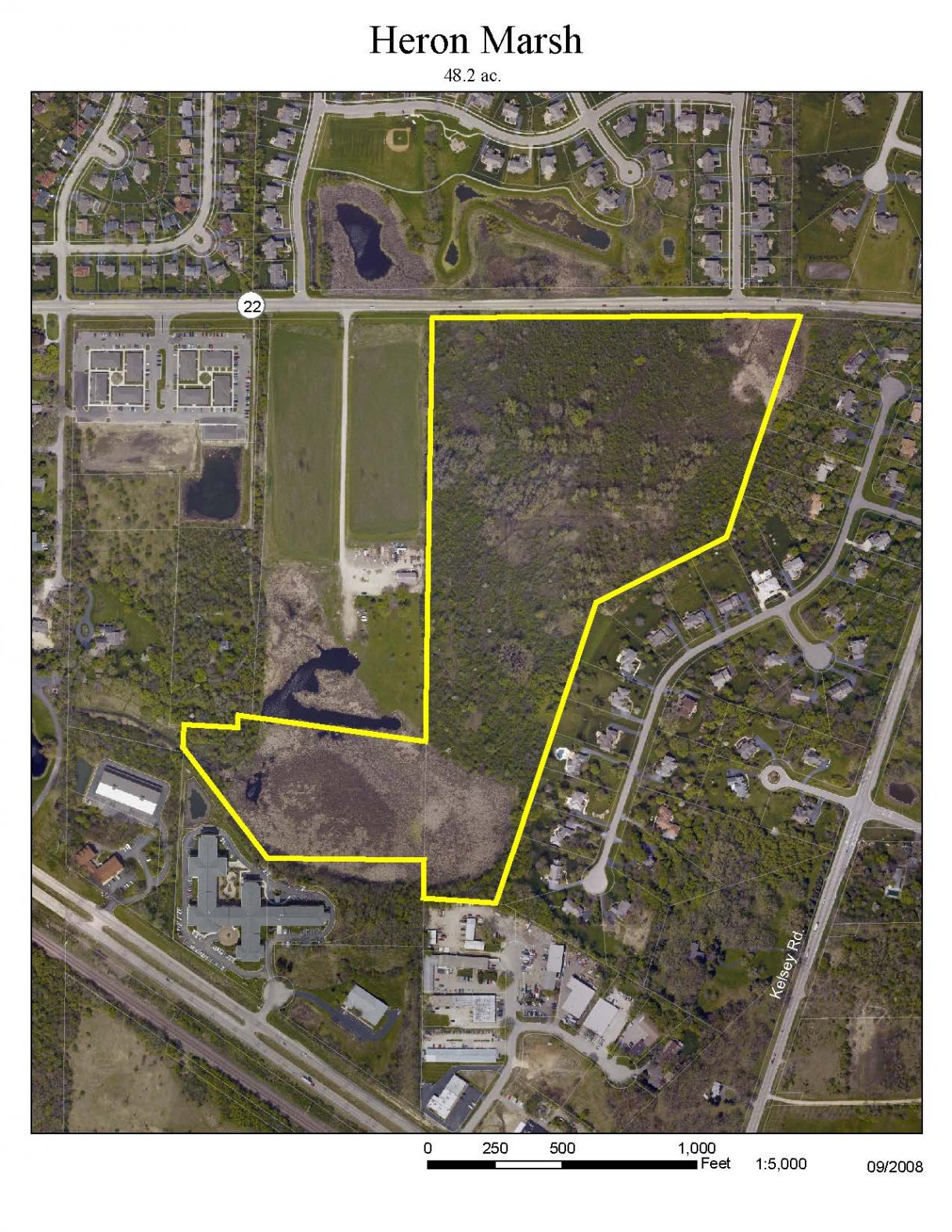 Two CFC properties which have not experienced significant restoration activity are Heron Marsh and Twin Ponds. They are important since they provide all the benefits of undeveloped land and because the marsh functions provide some wetland services.

Heron Marsh/Longeway is located in Lake County on Route 22 west of Kelsey Road and Pheasant Ridge subdivision. Thomas and Jacqueline Longeway of Classic Sunglasses and Robert Orbesen of Hubschman Group donated the land in two parcels, one in 1986 and the second in 1987 for a total of 48.5 acres.

The developers donated these primarily wet outlots from their projects, and they are valuable pieces that  encompass a wide range of land types, starting with mesic prairie sloping down through increasingly wetter types of prairie and sedge meadow until reaching  marshland. Valuable remnants of original prairie persist there in the face of invasive plants; in particular there is a rare alkaline sedge Carex buxbaumii. CFC’s initial plan for this property was a full restoration to native conditions with mitigation funds from a developer filling in wetlands elsewhere.

This was prime property for a wetland mitigation, but the planned mitigation fell through when adjoining  homeowners wanted the property left untouched. CFC eventually deannexed the parcel because of the conflict. When CFC determined that restoring Heron Marsh was not feasible at that time, it elected to concentrate on restoring other properties. Twin Ponds is located in Lake Barrington in Twin Ponds subdivision north of Roberts Road. Jack Lageschulte donated 3.3 acres in 1980 and 19.5 acres in 1981.

This preserve was farmland no longer in use when donated. Restoring the 22.8-acre prairie-marsh complex would require a major commitment of time and resources because the hydrology needs considerable work. CFC has given priority to restoration of higher quality parcels. However, the property has several positive characteristics. It is contiguous to  forest preserve property, and it has neighboring residents who have generously worked on the property with CFC’s permission and encouragement.

In 2000, CFC gave Marty Stillwell, a Twin Ponds neighbor, permission to cut brush and restore native plants on its property. Stillwell has since left the area, but other residents, particularly Steve Baeten, continue to cut buckthorn and herbicide stumps. All dead buckthorn is good buckthorn, and we thank the neighbors who persist in removing it.

The history of the Twin Ponds and Heron Marsh properties reveal that all restoration work is not as straightforward as CFC’s smoothly-run workdays might indicate. Land quality and the availability of resources for restoration are problems that CFC has had to consider since its inception, but successes like Flint Creek Savanna show what is possible.