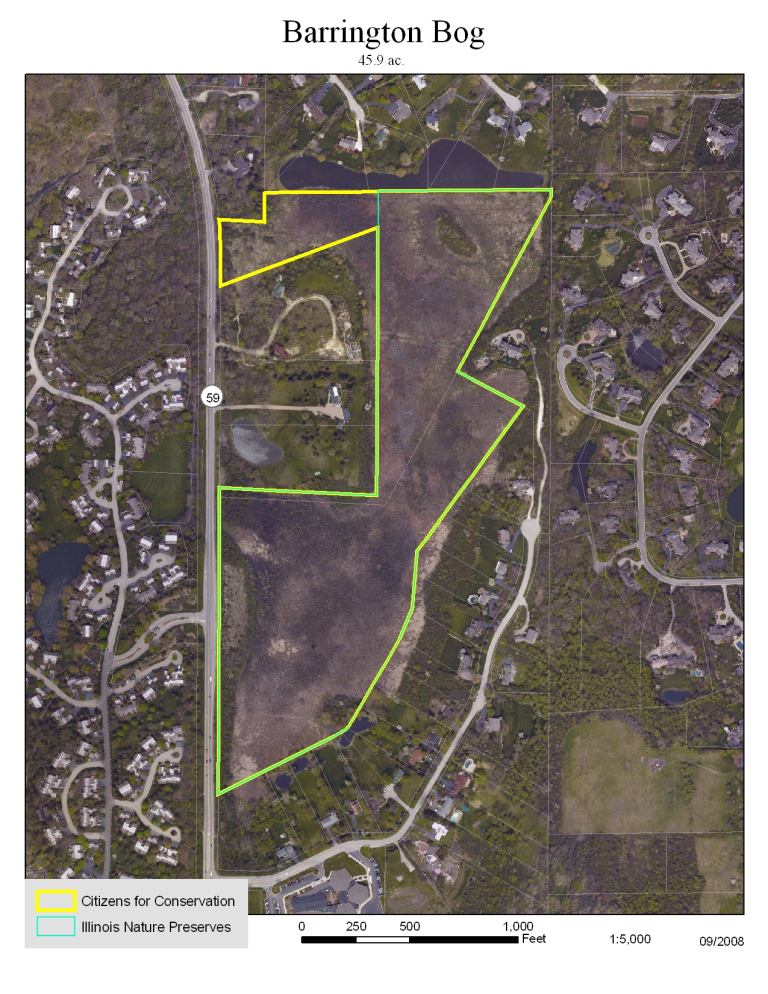 Wet, prolific, and vital, Barrington Bog is a graminoid (grassy) bog owned by Citizens for Conservation and dedicated as an Illinois Nature Preserve. It is located at the northeast corner of Route 59 and Grandview Road in Lake Barrington. There is little if any access since it is very wet and boggy! Barrington Bog in the early 1990s.

The 44.7-acre property was donated to CFC in three separate parcels between 1984 and 1989 by the Grandview Estates Association and by Kenneth and Edward James. In 1988 Barrington Bog was dedicated as an Illinois Nature Preserve, the highest protection that can be granted to a distinctive and rare natural area. The state-endangered large cranberry (Vaccinium macrocarpon) grows on the property.

Bogs are very special and specific environments: isolated, closed basins that receive water from precipitation and runoff from surrounding land. Bogs formed when glaciers left depressions in the land as they melted and receded. These hollow bowls filled with rain water and snow melt. The water is cold, acidic, and low in oxygen. Sphagnum moss forms a thick mat of floating plants which, over time, fills the pond with peat dense enough to support trees. These specialized plants grow and decompose, building up the foundation of acidic peat. Bogs depend on rainwater and clean groundwater to survive.

Barrington Bog is more specifically a graminoid or grassy bog. It is, like all bogs, acidic with a peat base. However, it is also a quaking bog. One can feel the bed of peat move underfoot. Bog plants at Barrington Bog include dwarf birch, buckbean, marsh cinquefoil, smooth white violet, hoary willow, bog willow, bog bedstraw, downy willow herb, and the previously mentioned large cranberry.

CFC’s objective is to return the bog to its original natural condition, but maintenance is a challenge. Buckthorn, reed canary grass, purple loosestrife and giant reed are persistent alien invaders. Volunteers have battled them for twenty-five years, making the best progress against purple loosestrife with the help of loosestrife beetles. Volunteers also clear brush and conduct controlled burns when possible.

CFC would like to restore the slopes down to the bog with appropriate plantings to help prevent further erosion on the steeper slopes. A 100-foot border of unmown vegetation is a necessary protection; however, some surrounding lawns already extend to the bog margin, and brush has been bulldozed into a small section on the east. Polluted runoff from Route 59 is problematic where, in several areas, there is little buffer to the sedge meadows.

Barrington Bog is a very special and important site. It provides habitat for the Baltimore checkerspot butterfly whose range is restricted to only a few colonies in northern Illinois. It also supplies habitat for rare bog plants with quite specific needs as well as for the insects that rely on them. Unfortunately, access to the preserve is limited since there is no boardwalk to protect rare plants from being trampled and because the wet peat soils are treacherous to human activity.