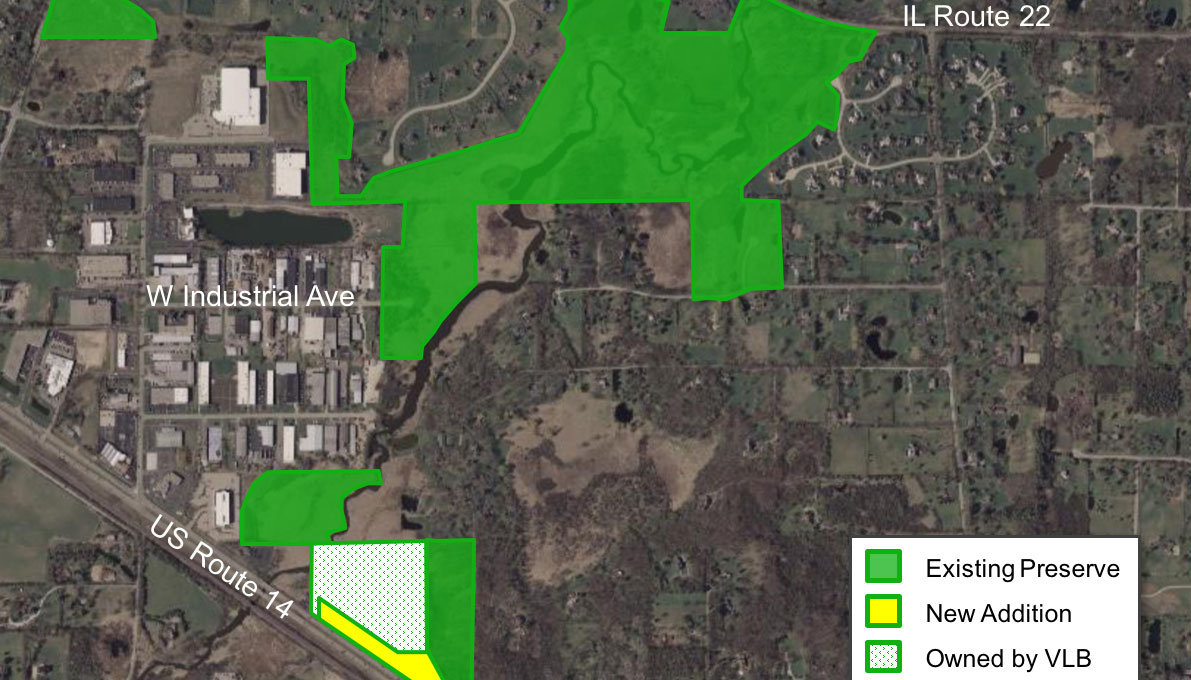 LAKE BARRINGTON, IL – Citizens for Conservation (CFC) announced that it is exercising its option under the 2010 agreement with the Village of Lake Barrington to purchase additional land at the “Gibbs Property,” located at the northwest corner of US Route 14 and Cuba Road. The new parcel of just over four acres (4.183 acres) will expand its existing Flint Creek Savanna property and bring the total area acquired from the Village since 2010 to over 12 acres. Flint Creek Savanna, located between IL Route 22 and US Route 14, is CFC’s largest preserve with almost 160 acres being preserved and actively restored by its dedicated volunteers.

CFC’s Land Preservation Chairman Alberto Moriondo stated, “We are excited to increase the size of our Flint Creek Savanna property which furthers the goals of our recently launched Barrington Greenway Initiative. This new addition allows us to continue restoration efforts on the southern section of the preserve, which already show visible results along Flynn Creek Drive, by extending them over time to a large portion of land along US Route 14, so that thousands of daily commuters can enjoy the views of this beautiful native scenery.”

In 2017, CFC launched the Barrington Greenway Initiative together with leading conservation organizations and foundations to create linked habitat corridors, increase biodiversity, and strengthen local ecosystems for the benefit of the community. CFC’s Flint Creek Savanna plays an important role in this effort by increasing biodiversity, providing cleaner air and water quality, and creating areas where residents can connect with nature.

Lake Barrington Village President Kevin Richardson said, “We are happy to see CFC again exercise their option to increase their holdings on the Gibbs property. This transaction, part of our multi-year partnership with CFC, underscores both their leading role in regional conservation and Lake Barrington’s vision of partnering with non-profit organizations and other units of government in preserving key parcels of open space critical to maintaining our community’s character. We value our collaboration with CFC and are very fortunate to have such a dedicated partner in our community as they not only acquire and preserve open space, they engage volunteers to restore it to its natural condition.”

With over 440 acres under management and having helped protect over 3,500 acres in the Barrington area since its founding in 1971, CFC is constantly looking for opportunities to preserve and restore natural lands. CFC anticipates that the purchase transaction will close by the second quarter of this year.