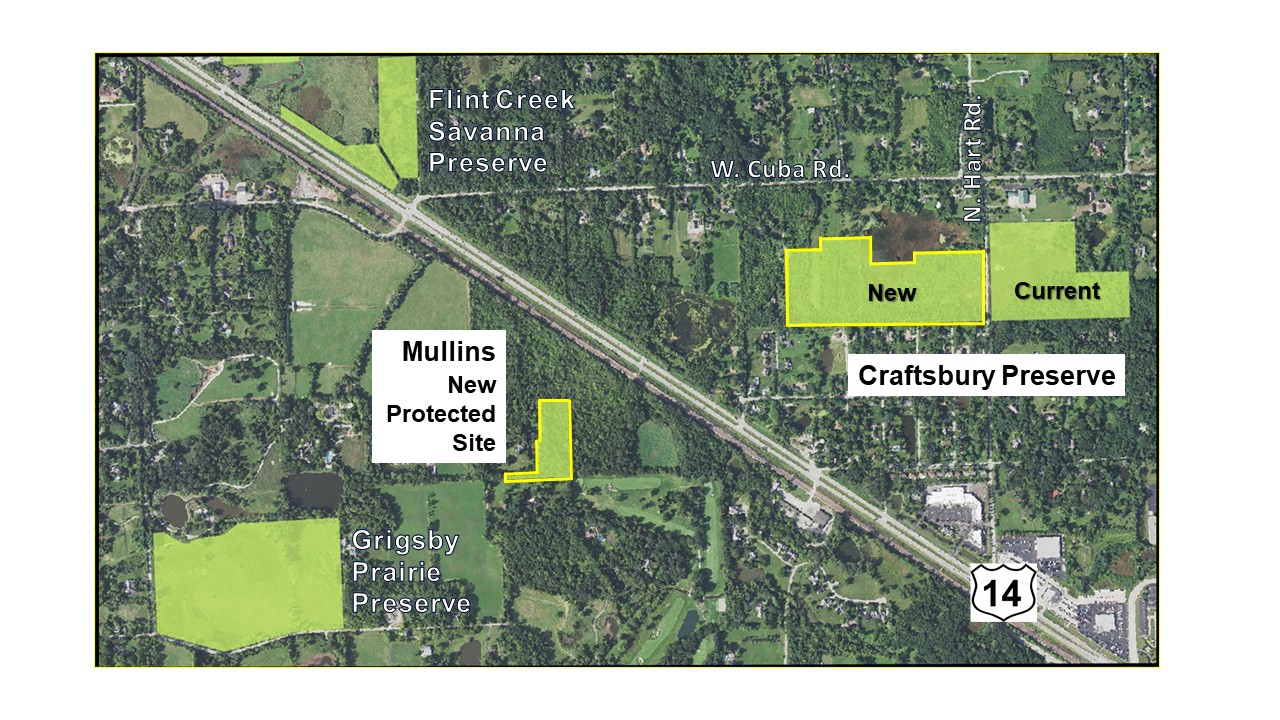 We are thrilled to announce that we have acquired two parcels of land that are significant additions towards achieving our 25-year strategic goal of linked ecosystems in the Barrington area.

One parcel was acquired from Arthur Rice III and Lynn Rice and is across Hart Road to the west of our Craftsbury Preserve, which is currently being restored. We plan to consolidate the preserve with the new 31-acre parcel creating a single preserve, divided by Hart Road. The new preserve will be 53 acres, and will be CFC’s second-largest preserve, after Flint Creek Savanna.

The other parcel of nearly five acres on West Oak Knoll Road in Barrington Hills was generously donated to CFC by the Joan Y. Mullins Trust. The land is near our Grigsby Prairie Preserve and is adjacent to the open space of Barrington Hills Country Club. We will be developing land management plans for the property in the future.

The acquisitions are important to CFC for a number of reasons, said Kevin Scheiwiller, CFC’s restoration manager. “The new Craftsbury tract of land offers rolling topography and wetland depressions left over as the last glaciers receded from this area,” he said. “It also contains the remainder of the main wetland from the original Craftsbury (East) donation. Even though all you can currently see from Hart Road are buckthorn and cattails, there are still small pockets of remnant, conservative species hanging on at this site. The removal of buckthorn will allow residents of the Barrington area to enjoy the 53 acres of rolling grasslands while furthering the ecological health of this site.”

Scheiwiller added that the Mullins land donation is a “vital parcel of open land within the Flint Creek Watershed, helping to further the Barrington Greenway. The property lies in between Grigsby Prairie, Paganica Prairie, and the remnant prairie along the Metra tracks. It will take quite a bit of effort to re-establish native vegetation on this preserve, but it is now protected as open space from future development.”

“CFC is thrilled to add these properties and thanks the many people, donors and volunteers who have worked to help CFC acquire these parcels,” said Kathleen Leitner, CFC board president.

With the new acquisitions, we now own and manage more than 476 acres. Over the past 48 years we have helped protect almost 3,500 acres in the Barrington area.